We decided, as we hadn’t seen any crocodiles in the wild (at that stage) we would visit Hartley’s Crocodile Adventures, located just 40 minutes north of Cairns and 25 minutes south of Port Douglas. In the brochure they said “simply the best place to see crocodiles and local wildlife in Tropical North Queensland”. After our visit, I would say they are probably right!

First we took the boat cruise on Hartley’s Lagoon, what an amazing trip, up close and very personal to several very large crocodiles. The driver (a Kiwi) was very funny and also very informative!! With stories of the largest crocodile trying to tip the boat over on one trip! And telling us they couldn’t give out life jackets because the crocodiles would choke on them. I’m sure he told the same stories several times a day but he obviously really enjoyed his job and had a real passion for the crocodiles with an amazing amount of facts and information.  Although we were looking through perspex windows – you get very close!!

The newly opened Gondwana Gateway is an innovative addition to Hartley’s where you can learn about the evolution of Australian wildlife in a beautiful forest setting surrounded by living descendants of Australia’s ancient past.

Hartley’s Lagoon is a front runner in the trend of “immersion exhibits” where the animals are displayed in surroundings that reflect their own habitats and also give viewers the feeling that they are, even for a few moments, a privileged and exclusive witness to a part of their daily lives. On this boat trip they have certainly achieved that! We had an intimate insight into the biology and behaviour of crocodiles. Nineteen crocs ranging in size from 2.5m to 5m cruise the waters, laze on the bank or build their nests, interacting with each other just as they would in the wild as well as keeping all the other residents of the lagoon on their toes!

Here are some photos of crocodiles through the perspex windows of the boat, frustrating that you can’t get a really clear photo but apparently they can reach the mesh above the windows,  so you soon get over that. 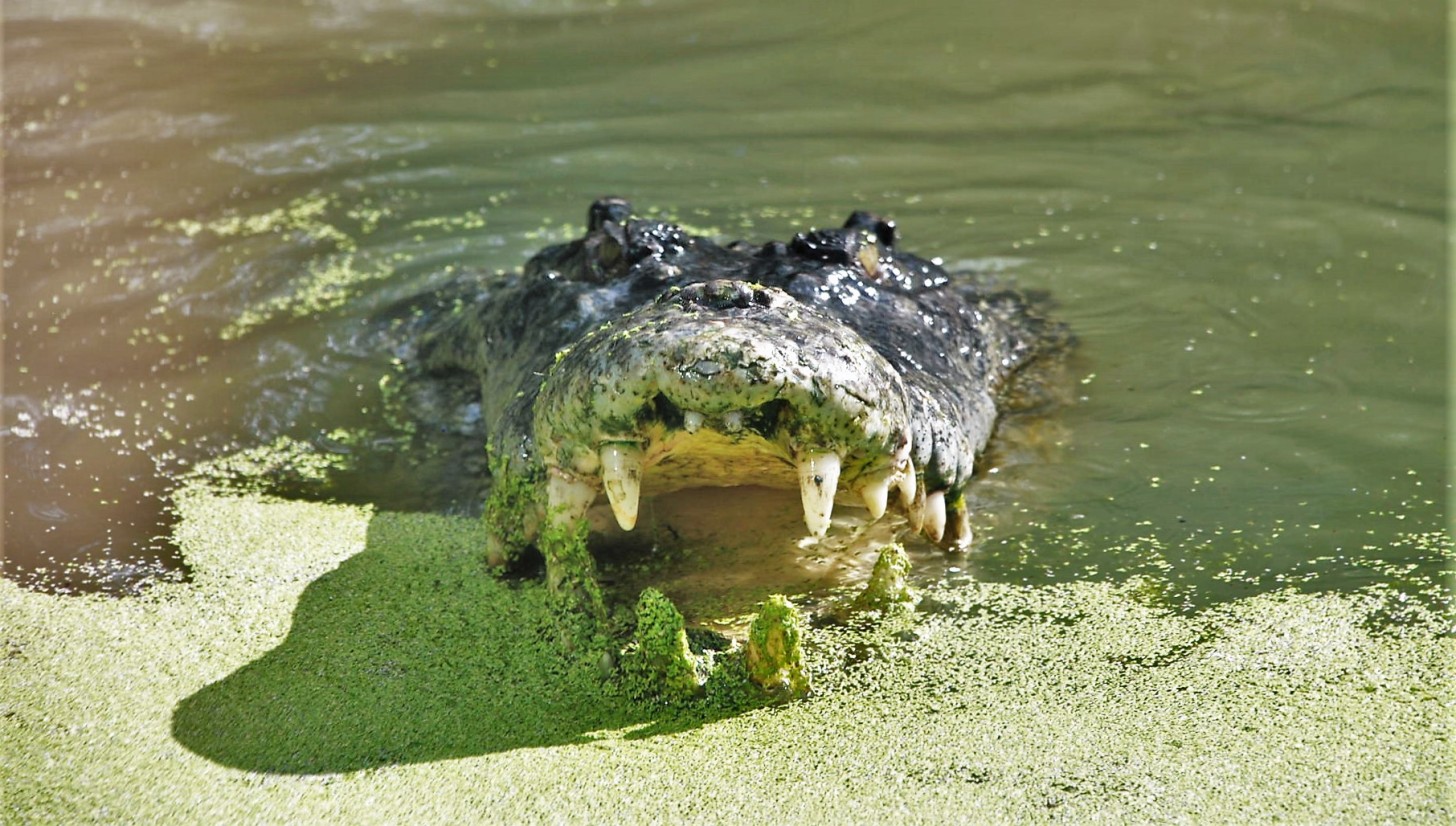 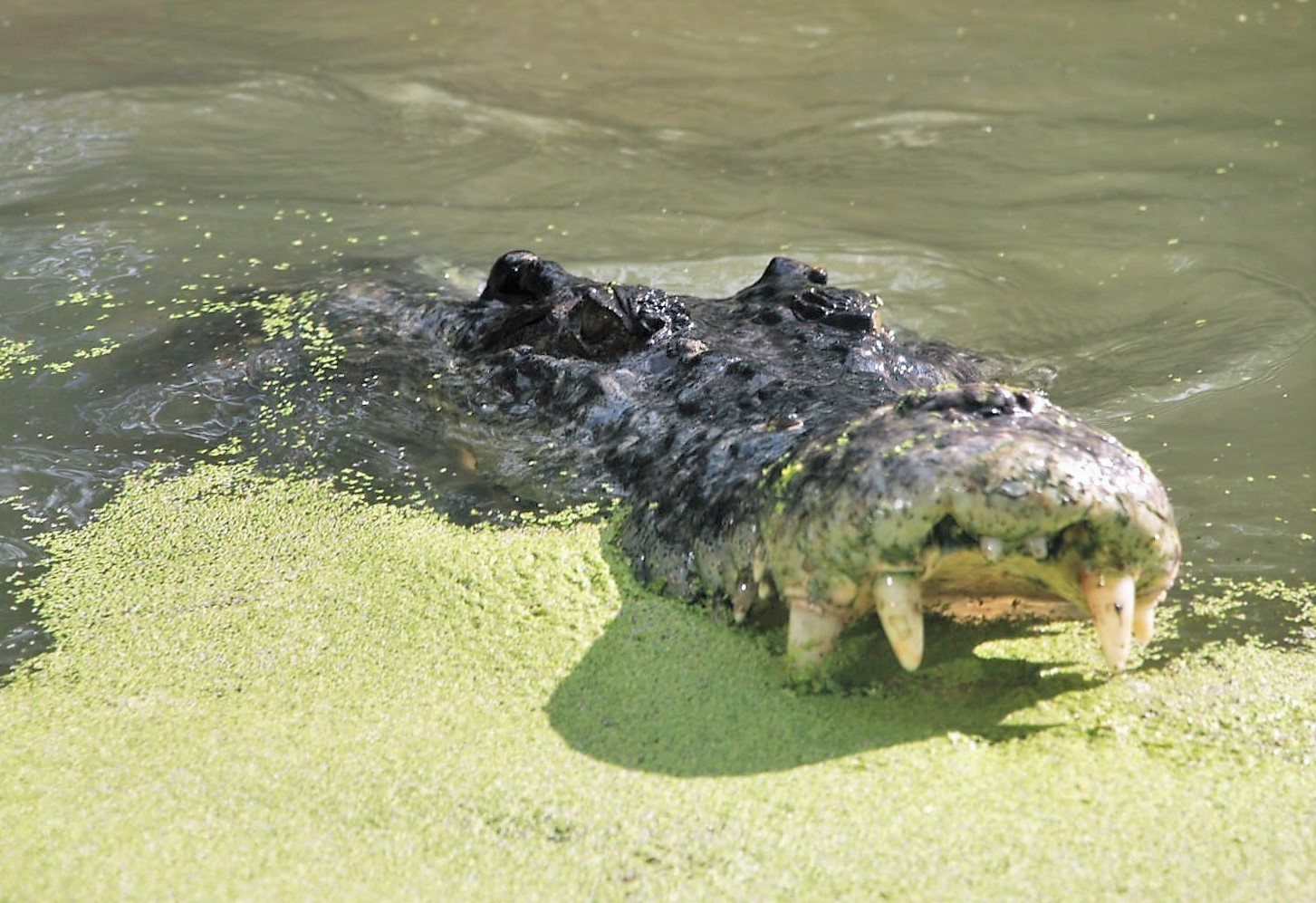 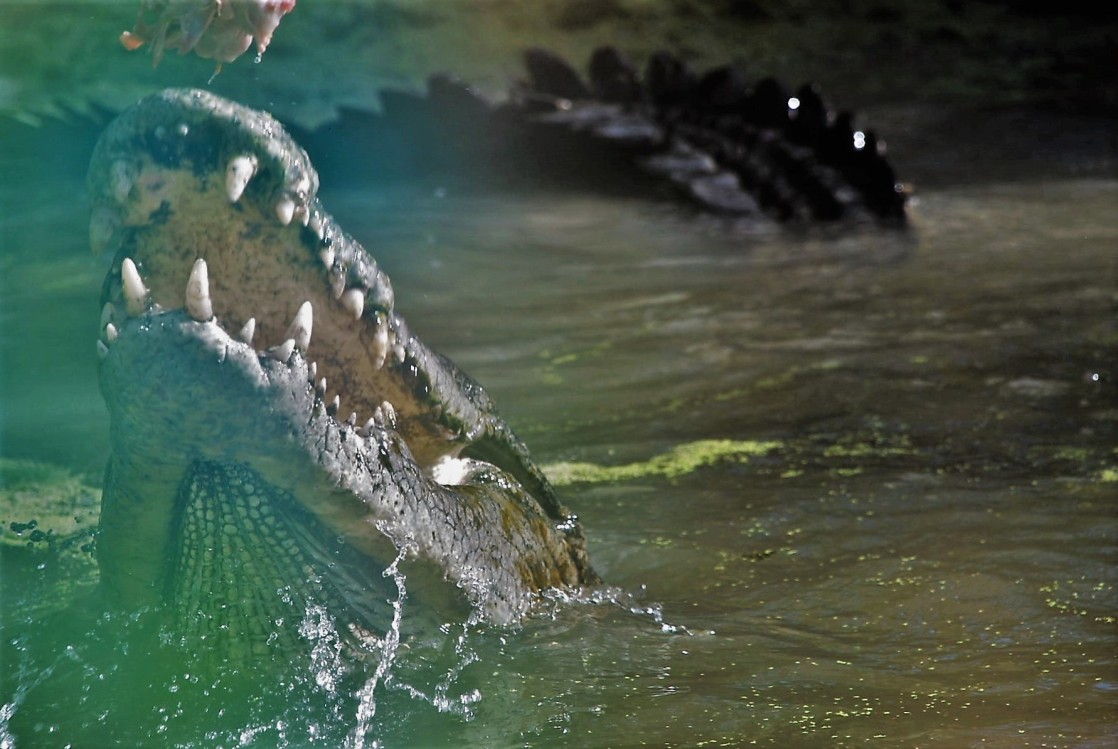 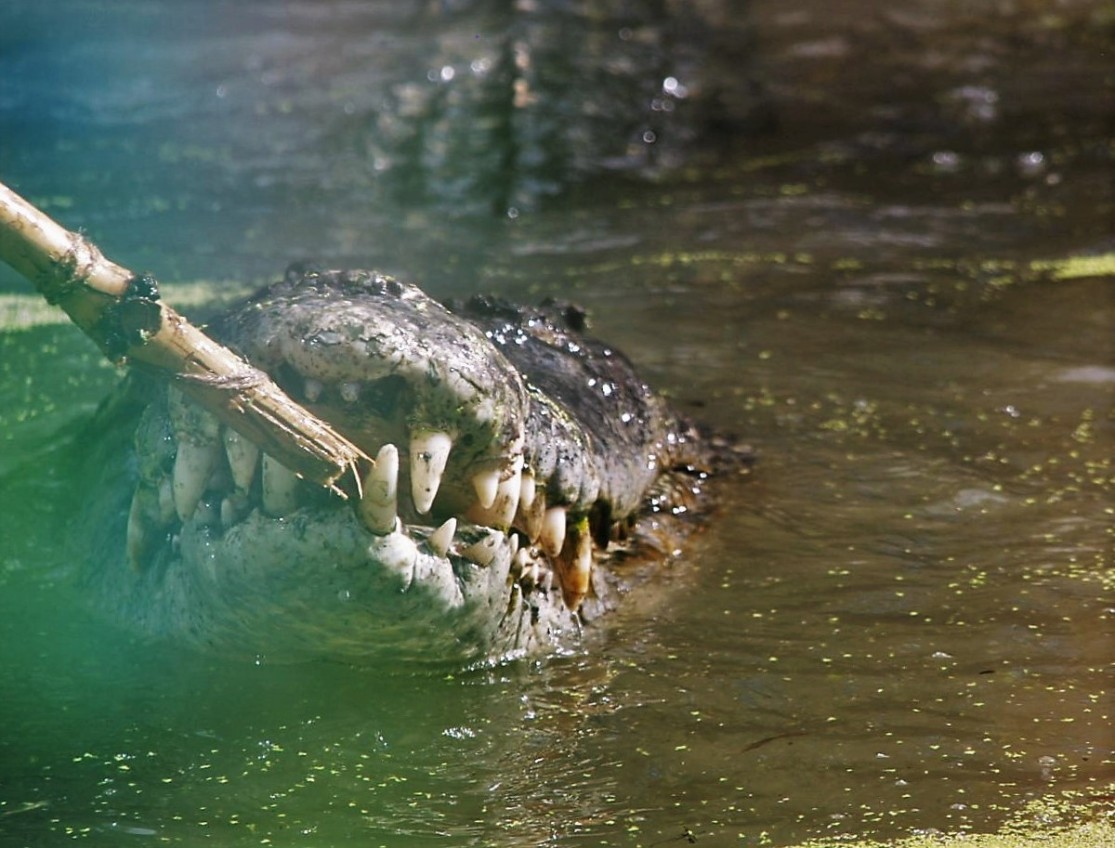 So well camouflaged and they can run extremely fast (12 m in the first second) but not for long! 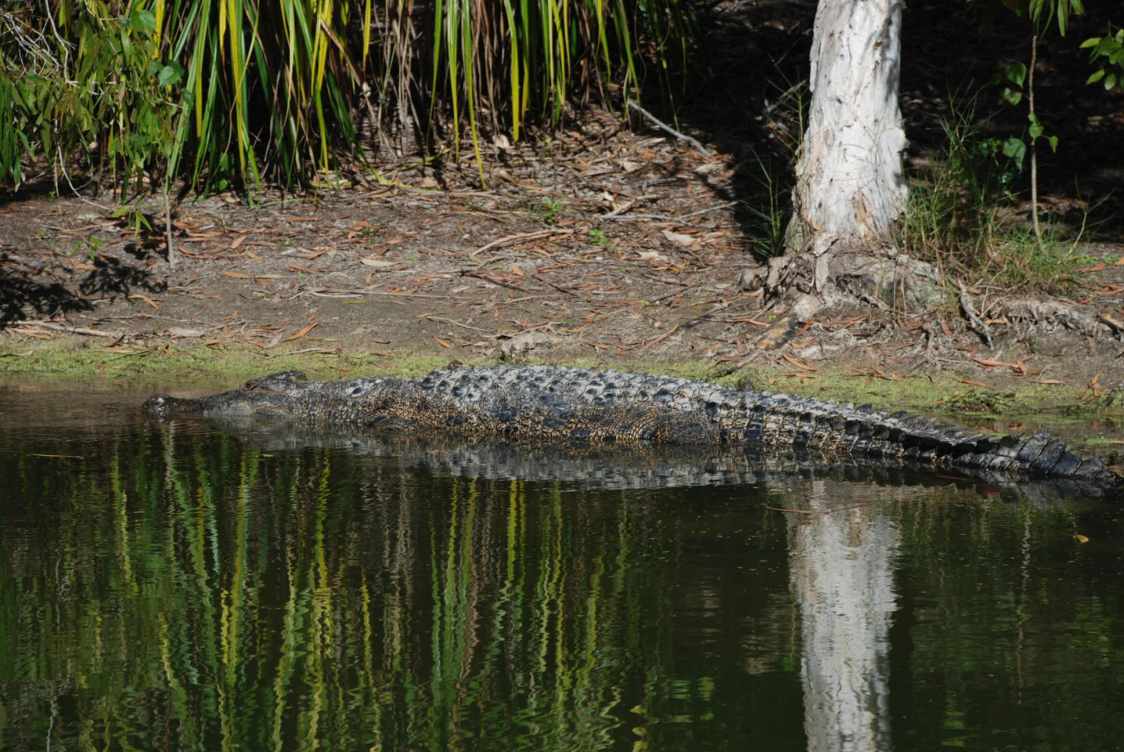 The rest of the park

With over 2100 metres of timber board walks and pathways leading through woodlands and rainforest where you can see an array of wildlife, including beautiful tropical birds, reptiles, insects and other native fauna. 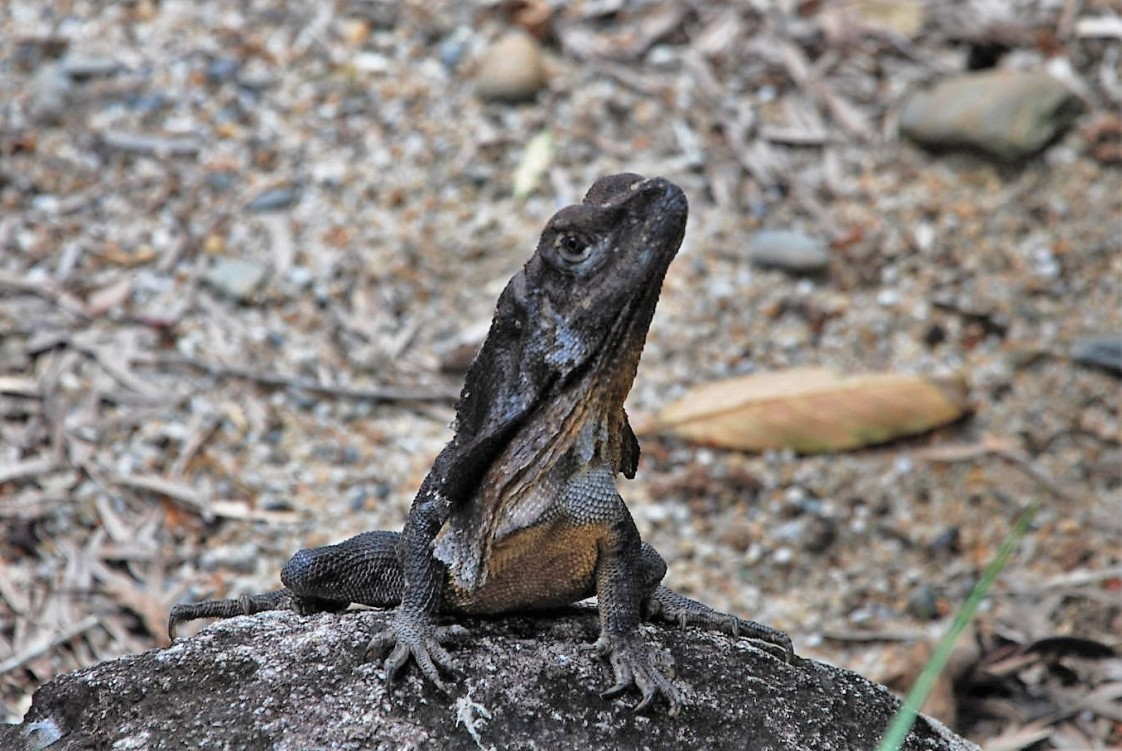 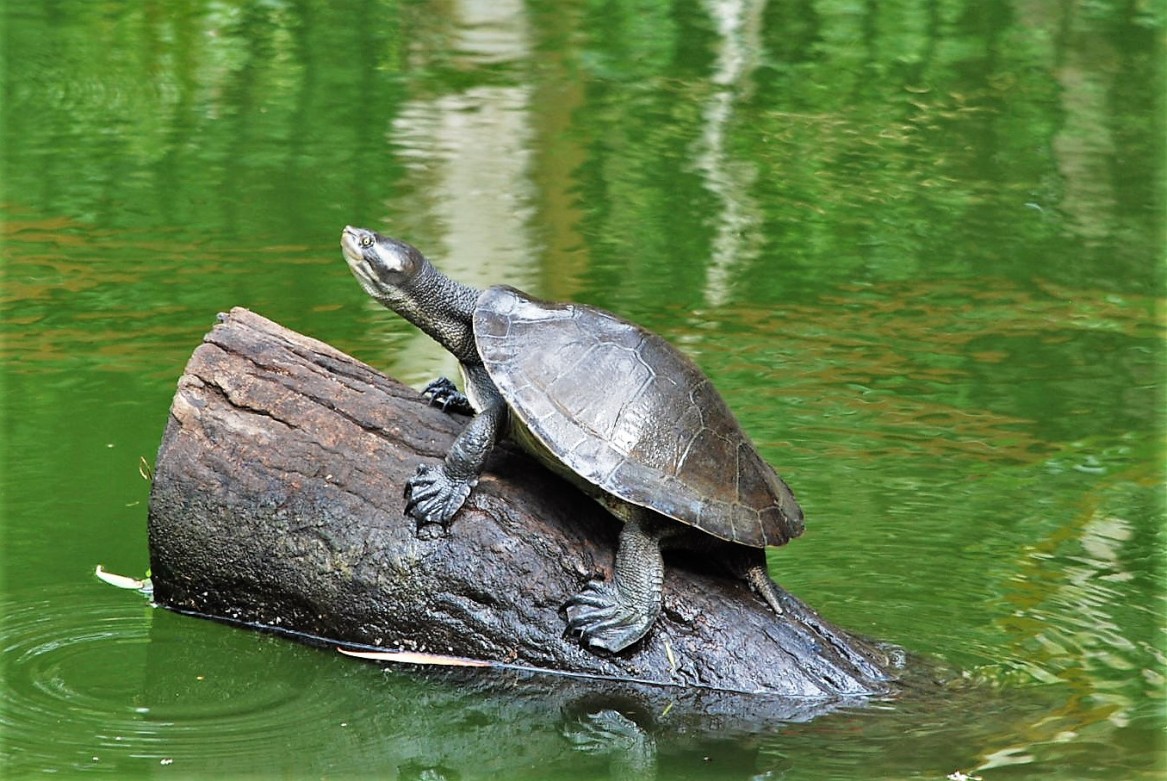 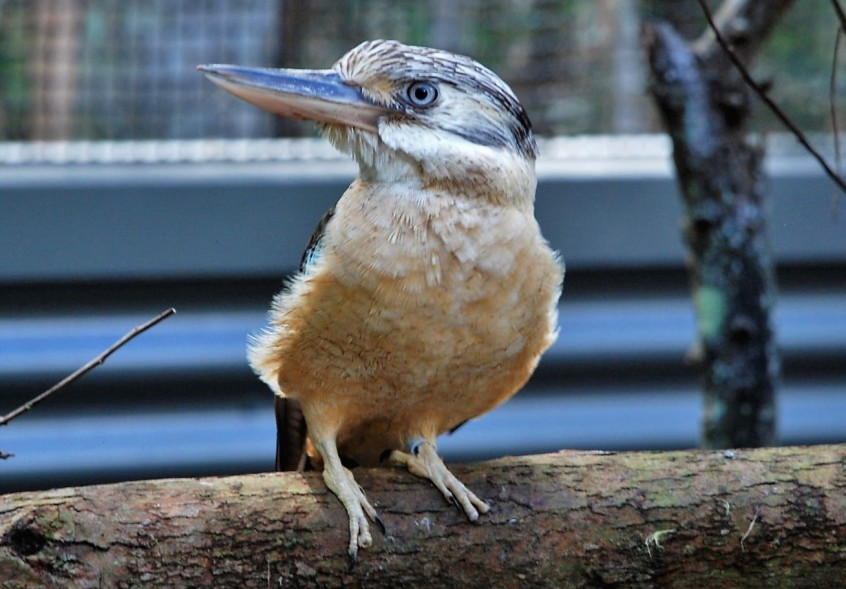 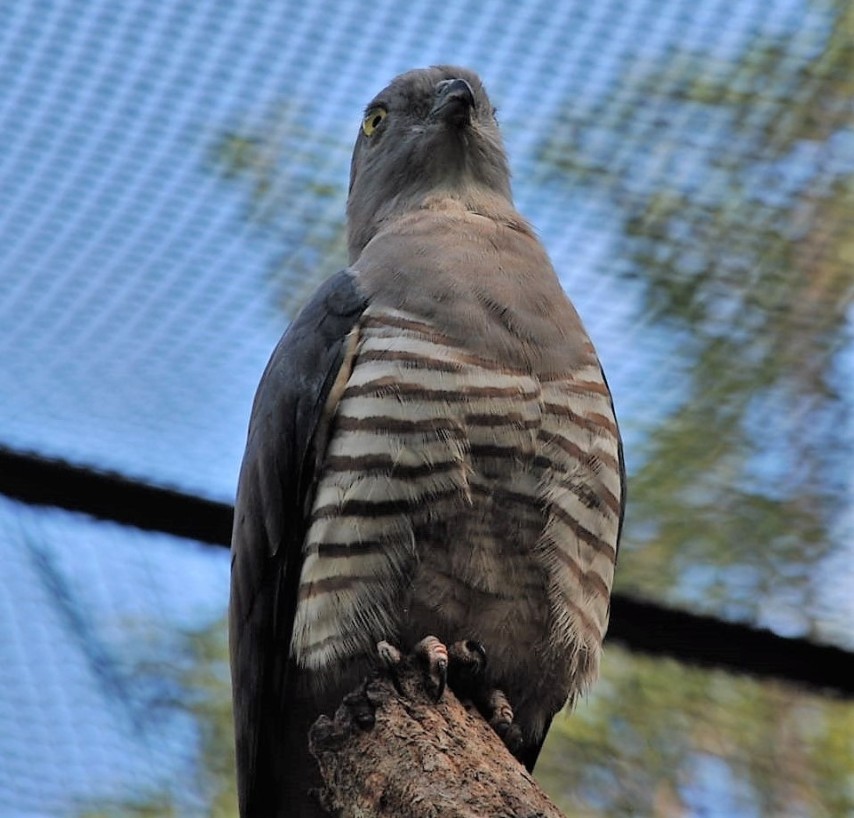 We learned about sustainable use and conservation on the Crocodile Farm Tour and got to stoke a young crocodile, the skin was so soft!. They keep so many in the same area so they don’t get territorial and fight as this can damage the skin, which is extremely valuable. We saw some crocodile skin hand bags in the shop, one was priced at $4,100.

For $28 each we certainly got our money’s worth here – such an interesting place to visit.

Open from 8:30am to 5:00pm every day of the year except Christmas Day, this multi-award winning eco-adventure attraction is located just 100 metres off the Captain Cook Highway on the spectacular scenic drive between Cairns and Port Douglas.   Don’t miss it!!!!!